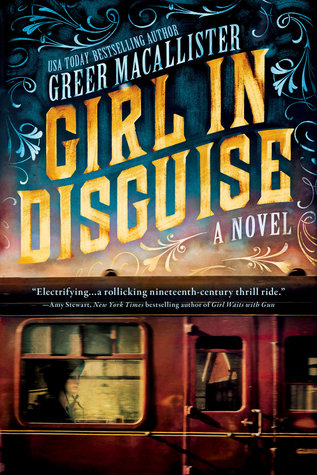 For the first female Pinkerton detective, respect is hard to come by. Danger, however, is not.

In the tumultuous years of the Civil War, the streets of Chicago offer a woman mostly danger and ruin-unless that woman is Kate Warne, the first female Pinkerton detective and a desperate widow with a knack for manipulation.

Descending into undercover operations, Kate is able to infiltrate the seedy side of the city in ways her fellow detectives can’t. She’s a seductress, an exotic foreign medium, or a rich train passenger, all depending on the day and the robber, thief, or murderer she’s been assigned to nab.

Inspired by the real story of Kate Warne, this spirited novel follows the detective’s rise during one of the nation’s greatest times of crisis, bringing to life a fiercely independent woman whose forgotten triumphs helped sway the fate of the country.

Thank you NetGalley and Sourcebooks for a free digital copy of this book.

I love reading historical fiction. I think reading this book now is very timely as it is Women’s Month.

Kate Warne, protagonist, widow, confident and has strong personality who became the first female detective at Pinkerton National Detective Agency. She needs to prove herself that she qualifies as a detective. The story goes how Kate disguises and use it to gather information nd solve cases.

Set in 18th century when women experience stereotype and treated unfairly. Below are some quotes from the book that proves that situation:

“Women are too delicate to do what our position requires. You might skate by for a while, but there will be a reckoning. When the day comes and you’re called to perform an extraordinary task, you’ll find yourself unable.”

“To the world, being a wife meant being a mother, which meant leaving the work.”

As for my review, I was hooked in the “Blue Eyes” chapter. I do had a feeling that Tim is Kate’s partner here. I am also expecting a lot of banters between the two but I was disappointed that they does not interact much because of their own assignments. However, I did not expect how they develop their feelings for each other. And I must say that it is my favorite part of the book. The pretense became real. The touch became real. The feelings became real. They were a lovely couple.

The turn of events were not exciting, at first. But when Kate and other operatives became spies, it was exhilarating! How they observed and moved without anyone noticing them… that’s breath-taking! Their actions were smooth and no one even suspects Kate! Further, I did not expect Mortenson’s role and that made me scream! I was devastated of what happened to Tim.

I was also shocked to know DeFrost’s preference! Well, I really did not expect that as it set in 18th century. But I think it’s great that Ms. Greer Macallister include a character that represents LGBT because I believe that we need more diverse books and I think, somehow, this one is a diverse book.

Moreover, I think it was amazing to include Abraham Lincoln, George McClellan, and Ward Hill Lamon in the story and how they became associated with Pinkerton National Detective Agency. Most the scenes and characters were base from facts and I like that as I really learned a lot from the history!

I would like to commend Ms. Greer Macallister, as how she write in details that important scenes. Further, I love how she grabbed the opportunity for the “freedom to imagine Kate Warne”. For me, this books represents women empowerment because Kate Warne is the first female detective and Ms. Greer described how a woman can change the history.

When I was a child, I dreamt of becoming a detective but I know that it is impossible and realized how dangerous it is as a detective. It will also take a lot of patience, courage, and strong-willed to become an operative.

“Deceived, lied, disguised, misled, threatened, entrapped, captured, hurt. If war came, or even if it didn’t, what more would we do? Were we devils, even on the angels’ side?”

2 thoughts on “Girl in Disguise Review”